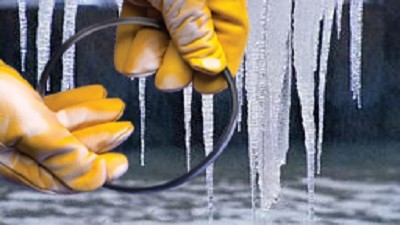 The search for usable reserves of oil and gas is taking operators into more remote and arduous environments, many of which are in the coldest regions of the world. This raises a challenge for elastomeric seal manufacturers as conventional elastomeric materials start to lose effectiveness as they become stiffer and lose resilience as the temperature drops. The members of the ESA Elastomeric and Polymeric Seals Division are rising to this challenge as they develop new compounds and seal designs to accommodate extreme low temperature operation.

These seals need to be tested to demonstrate their effectiveness at low temperature. There are numerous acceptable test methods to show the properties of the materials themselves at low temperature, such as torsion modulus, brittleness, compression set and temperature retraction. But these in themselves do not give a direct indication of whether a seal will continue to function. There are also proprietary functional test procedures which aim to identify the minimum operating temperature for seals; however all of these rely on the seal being energised by the pressure of the test fluid prior to being subjected to low temperature. This is not normally the case as in real applications the seal will often have been kept at low temperature prior to being exposed to the pressurising media and because it has already stiffened may not then be able to energise to maintain a seal.

So a project commenced to prepare and validate a suitable test method for this common but more severe condition. The full method is outlined in several papers produced by the Division members, one of which is reproduced here (Read here).  In short temperature is reduced to a point just above the Glass Transition Temperature (Tg)at which a seal can be formed, temperature is then dropped in 5°C increments until a seal cannot be formed; then increased in 1°C increments until a seal is formed once more; this temperature is reported as the  minimum sealing temperature.

This method produced results that were very close to Tg, however it was found that the rate at which cooling took place had a large influence on results.

The work carried out has led to valuable insights into the measurement of low temperature sealing performance and the relationship between functional sealing tests and existing laboratory tests. However, the original objective of deriving a definitive test for low temperature operating limit guidance has not as yet been achieved, primarily due to the significant effect of cooling/heating rate on the end result. To attempt to set tight limits on this parameter was felt to be impractical, and indeed counter-productive as in real applications these rates can vary widely.

However the basic test methodology has been shown to be effective and could be used to qualify materials for specific applications. It is strongly recommended that such testing is carried out in specific cases where low temperature performance is of importance.

The ESA Elastomeric and Polymeric Seals Division members would encourage end-users to discuss low temperature sealing requirements with their seal suppliers and test houses to allow realistic test regimes to be developed for applications where materials are intended to be used at the limits of their capabilities.