People within the ESA and their stories

People share their stories and experience of working within the Sealing Industry and the ESA. 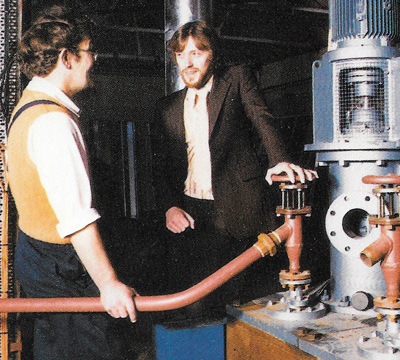 David is the Technical Director of the Elastomeric & Polymeric Seals Division and the Packings Division within the ESA. His history of working with Sealing Devices is covered by an article written by himself for our news letter entitled the Accidental Sealing Engineer. His knowledge and experience is incredible yet he started off not knowing what to expect. Having travelled the world and enjoyed so many life changing experiences within this industry perhaps you might also want to follow in his footsteps…

When I graduated from university in 1974 the last business I expected to spend over 40 years enjoying was that of sealing technology. With a degree in Chemical Engineering I was all set for a glittering career designing chemical plants with one of those big prestigious petrochemical companies. But in those days engineering graduates were plentiful and competition for places was extremely fierce.

So I took a ‘temporary’ role in production development with a sealing device manufacturer and I am so glad that I did. First of all the production techniques are so numerous and varied that I was quickly exposed to plant and procedures that were completely new to me. Elastomer compounding and moulding, calendaring of fibre jointing, plaiting and braiding of yarns for compression packings, water jet and laser cutting and many others present their own fascination for the engineer.

But it was when I moved on to the sharp end of application engineering that I was truly hooked. The point is that every industry relies on seals and so the depth and variety of challenges the seal designer faces are extensive. And because the customer base is so wide, when one industry is going through a quiet phase, others will be booming so there is always work to be had.

My first specialisation was in the Oil & Gas Exploration & Production industry during the rapid expansion in the North Sea, working closely with major equipment manufacturers to develop well-head sealing solutions to deal with the demanding operating conditions. Later on I began to get involved with renewable energy applications in both wind-power and hydro-electric turbine sealing. And towards the end of my full time career I worked with marine equipment manufacturers on propulsion sealing systems; it is quite difficult to keep the sea-water out while preventing bearing oil from polluting the ocean at the same time.

There is real satisfaction to be gained from devising sealing solutions, whether it is in modest applications in the water industry to high tech duties in power generation or oil and gas production.

Involvement in sealing technology has given me the opportunity to travel the world, interact with a huge range of industries and contribute to protecting the environment. I have never regretted accidentally joining this fascinating industry.

Here are the currently available positions available within the ESA members together with a link to the company concerned, and current candidates who posted their CVs.